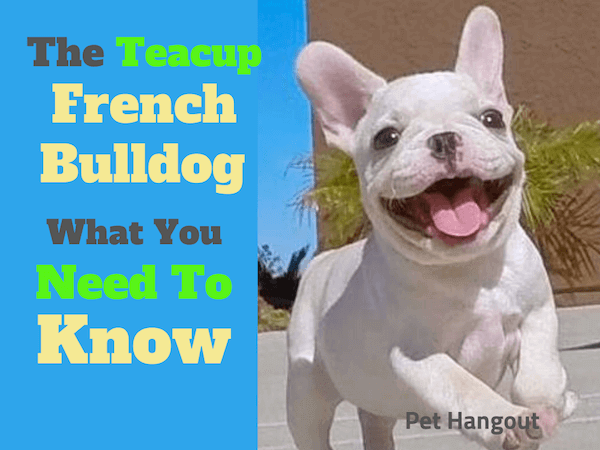 Welcome to our Dog Breed series!

Today Pet Hangout is talking about the ever so cute Teacup French Bulldog.   Keep reading to learn all about this miniature version of the French Bulldog and what you need to know!

The Teacup French Bulldog is the intentional miniaturization of the French Bulldog.    The “cute factor” of these mini-dogs has driven the demand and $ for them, especially among the rich & famous, way up.

They are best known for their easygoing and affectionate personality.     Among their strengths, they are alert, patient, bright, and very playful.

Since they are a tinier version of the French Bulldog, they are tender and delicate and should be handled with great care.    They are also known for greater health challenges, even more so that the French Bulldog,  due to unethical breeding practices and their small, fragile frame.

Their life expectancy is anywhere from 10 - 12 years.

Their colors range from Fawn, White, Tan, Brindle, Blue, Cream, Chocolate Brindle, Sable, Blue Sable, or Pure Black.  They are best known for their desire to cuddle and their "oh so adorable" face.

They will steal your heart at first sight!    It’s like having the adorable baby French Bulldog that stays a pup forever.

They are happiest playing and hanging out with their family and favorite humans.   They have a huge need to stay close to their humans always. 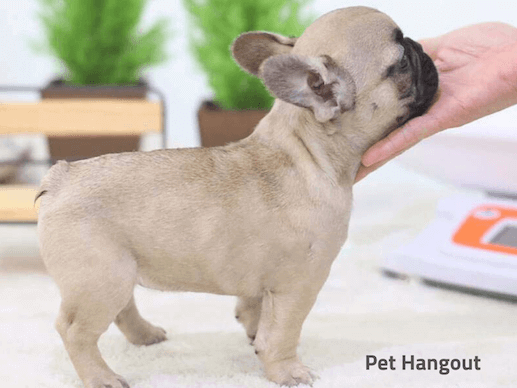 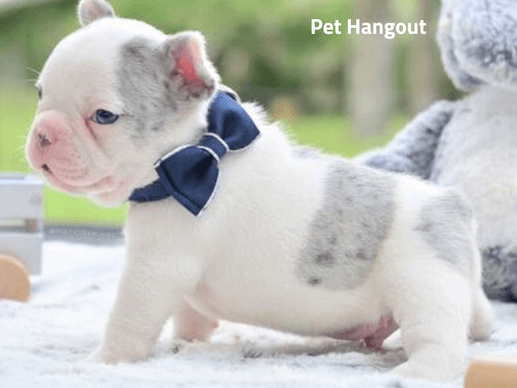 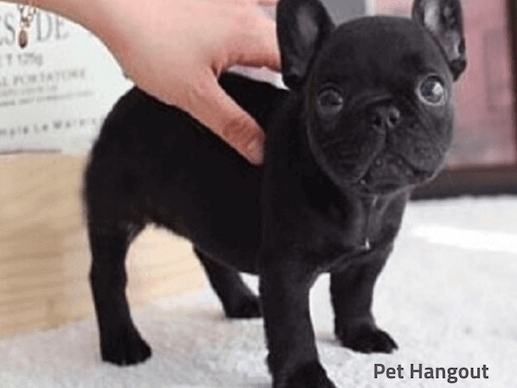 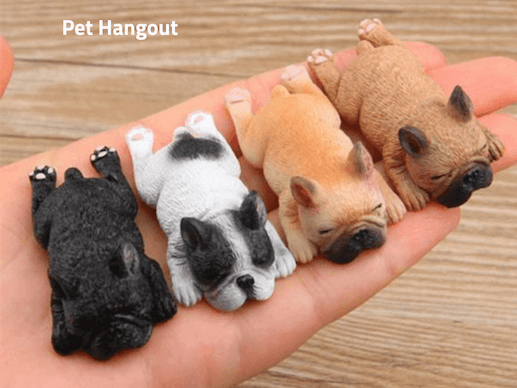 Questions to ponder before taking the leap:

Good with children/elderly:  5 (some children may be too rough)

Needs to be around humans:  9

Likes to be around other animals:  8

Destructive as a puppy:  7 (very intelligent - you can redirect easily)

Destructive as an adult:  4

Health issues:  10 (Many due to poor breeding practices)

Needs lots of grooming:  4 (not much hair to shed, occasional brushing is good) 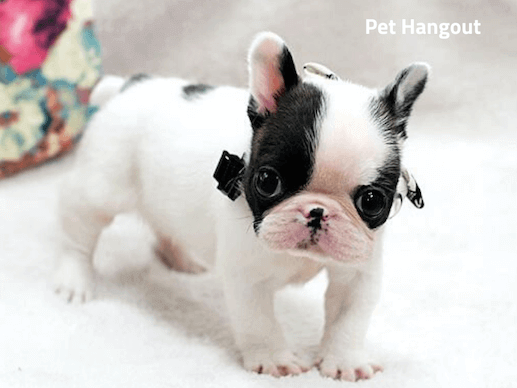 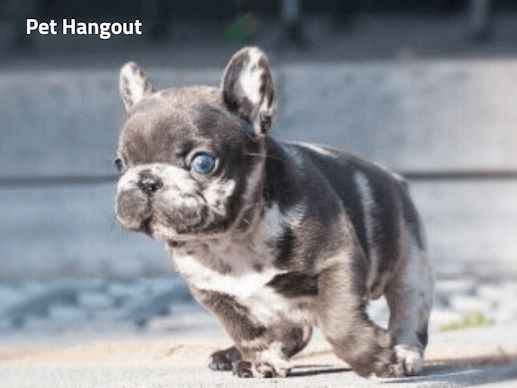 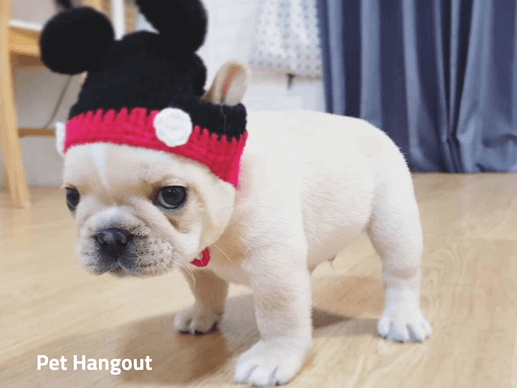 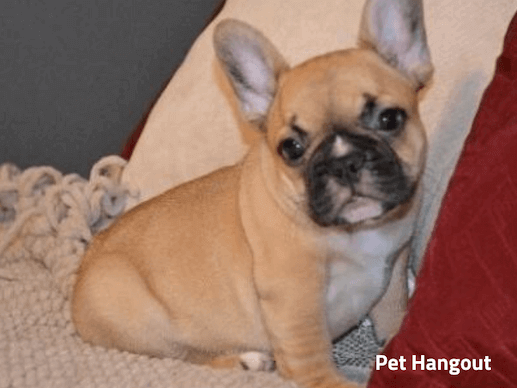 More about the Teacup French Bulldog:

Frenchies are highly intelligent and serve as awesome guard dogs.   Even a little Teacup can bark ferociously!

Because of their heaviness in front of their bodies, they cannot swim at all.    You must keep close watch on them if they are around any body of water, including pools, lakes, oceans, or fountains.

The  “bat ears” and half-flat, half-domed skull are distinctive features of the French Bulldog and are recognized all over the world.

During the 1800s, the toy-size Bulldog was carried to Paris by English lacemakers whose trade had been impacted by the Industrial Revolution.

They moved to Northern France to continue their craft.    Over the course of the next decades, the Bulldog found so much favor among the French that they began breeding it with other small dogs like the Terrier and Pugs.

The Parisians just loved this dog and continued to refine the look.   Eventually, in the 20th century, artists and wealthy businessmen carried the French Bulldog to America.

Breeders have pushed the envelope as far as breeding the French bulldog with other small dogs.   Thus, the Teacup French Bulldog has become a reality, although not recognized yet by the AKC.

Children - Since the Teacup is so delicate, we caution you to let children interact with the pup.    The dog would be gentle and playful with the child, but the child could accidentally hurt the tiny dog.    Please use your best judgment when allowing small children to play with the pup.

Elderly - Since the Teacup French Bulldog is so loving and faithful and does not require a lot of exercise, we think it’s a perfect match for an elderly person.   Especially someone that would benefit from pet therapy.

Play - Very athletic, keen and playful.    Give intellectual toys to stimulate and challenge them too.

Other Pets - Generally gets along well with other pets. 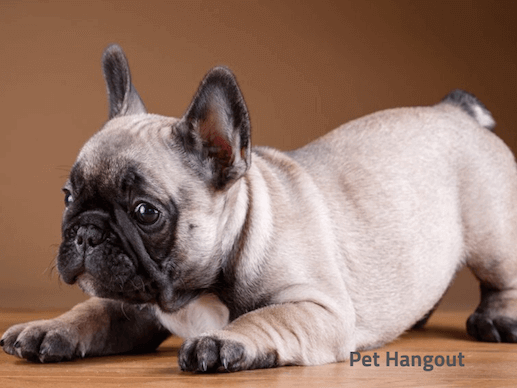 Feeding:  A grown Teacup French Bulldog eats .5 - 1.5 cups daily depending on their activity level.   Normally, feed  .25 - .75 cup in the morning and once again in the evening.

Note:  The French Bulldog is prone to weight gain issues so be mindful when giving treats and feeding.   Please choose a high-quality food with high protein.

This is very important for the healthy growth of your Teacup French Bulldog.  Maintaining your dog at a healthy weight will help keep health issues to a minimum.

Grooming - Try to brush at least once / week.     They normally do not shed much or matte but brushing keeps their skin in great condition.   It’s also a good idea to bathe them at least once/month.

Exercise - A little bit of walking, playing each day will keep your Teacup in tip-top shape.

As a Puppy - This doggie really doesn’t need extra exercise.   Although, they may get a “wild hair” occasionally and want to romp, run, and play.

Common Health Issues (The French Bulldog is known for more than average health problems.    The Teacup variety can have even more issues due to its delicate nature and unethical breeding practices by some breeders):

There are a lot of things to think about when searching for a reputable French Bulldog breeder.

It’s full of a wealth of information on questions to ask, things to look for, the different types of breeders, and all the good, bad, and ugly of the breeding world.

Educate yourself with the facts first before talking to a breeder for the love of the French Bulldog!

Watch this intro video on the French Bulldog:

And please look at this cutest ever little Teacup...

Are you going to get a Teacup French Bulldog?

Tell us below what you just love about them...

Very great information. Just adopted a teacup frenchie and didn't know they were a thing. I am so happy to have found her.

This is the kind of loving puppy I need to love! Please let me know where I can get a puppy.