The Doberman Pinscher Breed - What You Need To Know 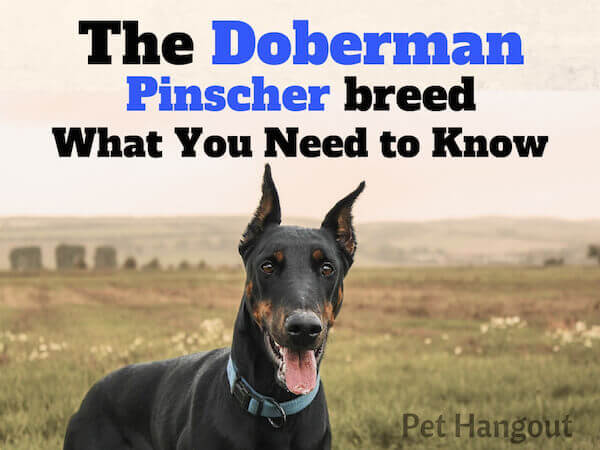 Welcome to our Dog Breed series!

Today Pet Hangout is talking about the stately Doberman Pinscher breed and what you need to know.

The Doberman Pinscher is a beautiful and regal looking breed with a long lean body.

They are super protective of their humans and love being close to them.   They are affectionately known as the “velcro dog” because they like to lean their body against their human’s legs.

Although they are well known for their guard dog attitude, they are also a very sensitive animal and can get their feelings easily hurt.

Their life expectancy is anywhere from 10 - 13 years.

They are best known as a fearless, alert guard dog and most loyal companion to their human.  They can make great family dogs if raised with children and have the opportunity to connect deeply with their humans.     You will be hard pressed to find a more faithful dog.

They are happiest when connecting with their family and favorite humans.   They have a huge need to stay close to their humans always. 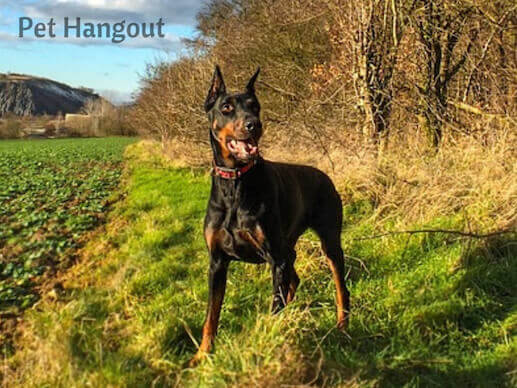 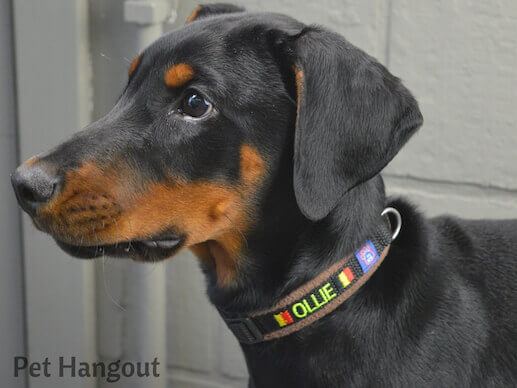 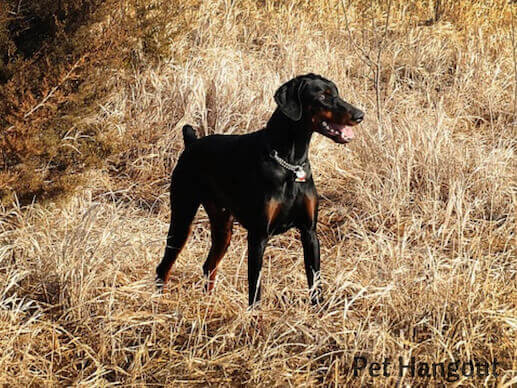 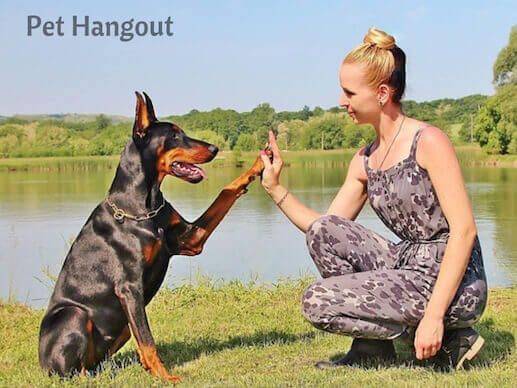 Questions to ponder before taking the leap with this dog:

Good with children/elderly: 6 (if properly socialized at an early age)

Needs to be around humans:  8

Likes to be around other animals:  6 (could go either way depending on their socialization with other animals.   If not socialized, your Doberman may want to chase and catch other small animals!)

Destructive as a puppy:  7 (give lots of toys when you are away)

Destructive as an adult:  6 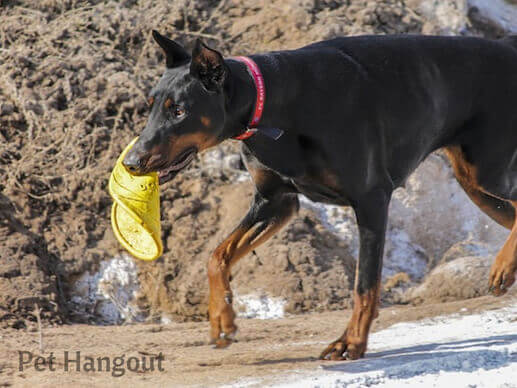 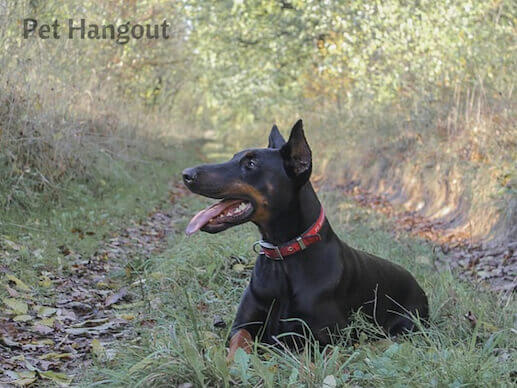 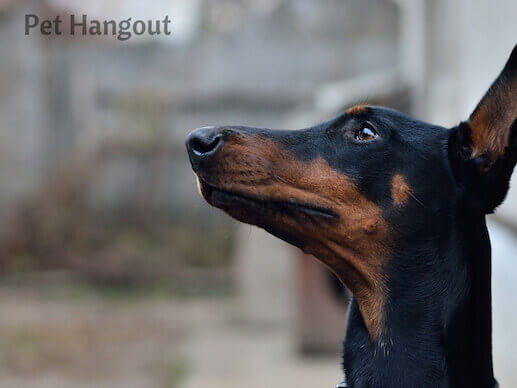 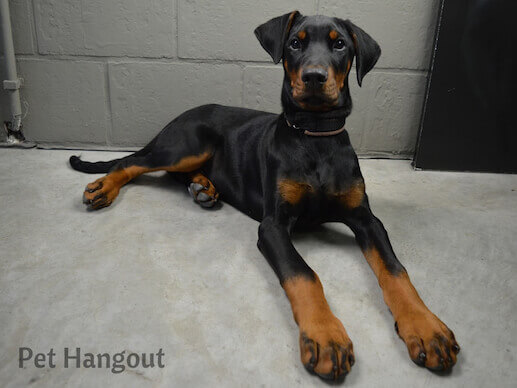 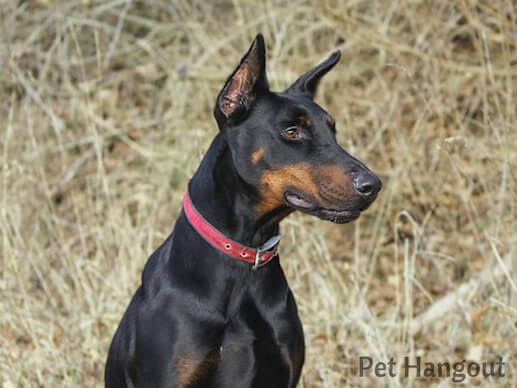 More about the Doberman Pinscher:

Notable Cool Facts:  The Doberman breed was created by breeding a lot of different dogs together.   Among some are the Rottweiler, Great Dane, Greyhound, and German Shorthaired Pointer.

Since they are extremely intelligent with an athletic build, they have been used for a variety of sports and jobs including scent tracking, assisting police, search and rescue missions, and diving.

They are the 5th smartest breed and have been known to even outsmart their trainers!

History: In the early 1880s, a tax collector named Herr Karl Louis Dobermann found himself carrying large amounts of cash through dangerous parts of town.   He decided that he needed a guard dog to help him travel safely.   Thus, the need to breed a dog that was refined but intimidating was born.   He used his access to the dog pound, resulting from one of his jobs as a dog catcher, to began breeding different dogs to attain his desired protection.

Children - If your Doberman grows up with a child, he or she will be a most loyal companion to them.   Otherwise, you need to make sure your Doberman has been properly socialized and feels comfortable around children to avoid any unwanted danger to children.

Elderly - If trained properly, a Doberman can be the most wonderful guard dog and loyal companion to a lonely senior citizen.  With that being said, don't forget that they need LOTS of exercise.  The perfect pairing would be a senior with a fenced in area so that the dog can run around daily.

Play - Very athletic and playful.    Give intellectual toys to stimulate and challenge them too.

Other Pets - Make sure your Doberman has been properly socialized (preferably when a puppy) to be around other animals like cats and small dogs, etc.   This is key to your Doberman being friendly to other animals.  Otherwise, their instinct of chase and capture may kick in!

Strangers - Although they can be awesome watchdogs, they also can be intimated by a stranger after they initially bark to alert you.

When in a new environment -  They may feel a bit anxious in new environments, especially if not with you.   They will be most clingy to you during new situations, places, etc.

Feeding:  A grown Doberman eats 2 - 5 cups daily depending on their activity level.   Normally, feed  1 - 2.5 cups in the morning and once again in the evening.   Please choose a high-quality food with high protein.  This is very important for the healthy growth of your Dobie.

Grooming - Try to brush at least once / week.   They do shed consistently but it isn’t terrible since their hair is rather short.    A Doberman doesn’t need a lot of baths.   You can get by with giving them a bath every 3 - 4 months.

Exercise - They need 2 hours of exercise daily.    They also have a huge need for all-out running during this time.     A fenced  area where they can romp and play would be awesome.

There are a lot of things to think about when searching for a reputable Doberman Pinscher breeder.

We encourage you to check out the Breeder Referral information  http://dpca.org/BreedRef/ (from official Doberman Pinscher Club) to learn what to look for in a good dog breeder.

It’s full of a wealth of information on questions to ask, things to look for, the different types of breeders, and all the good, bad, and ugly of the breeding world.     Educate yourself with the facts first before talking to a breeder for the love of the Doberman Pinscher Breed!

Watch this intro video on the Doberman Pinscher!

Do you think a Doberman would work good for you?

Need more breed info?   Check out 20 Things You Need to Know about the Loving Labrador Retriever, 22 Facts About the Amazing and Loyal German Shepherd, and The Border Collie Breed - What You Need to Know.

Ive had Dobies for 35 years, Never a problem when the kids were young or old. They have more personality than any breed Ive been around. They do try to communicate with you through stares and bark talking... No words can describe just how amazing this breed is!!! Problem is once you've shared your life with one you will ALWAYS want to share your life with one. The only problem you will ever have is when they break your heart after they decide they've taught you enough and cross Rainbow Bridge...

Awe William, I couldn't agree more with you! They are beautiful creatures and have so much love to give us. We have to treasure the precious time they allow us to be with them, don't we...Thank you so much for your insight into the Dobie!

I have had four Dobermans in my life , I trained them myself and love everyone of them. Great around family. My greatest one was my last one he was Blue, great dog very smart he lasted 15yrs. I would have got another one but had to take of my mother and now they are way to expensive for a senior.

Wow, Darrell, I can tell you love the Doberman. What types of things were you able to train your Doberman's to do? I hope you can get another Dobie one day!

Hi Jim,Check out this Dobie Rescue - http://www.dobiesandlittlepawsrescue.org/index.htmlThey may know another rescue close to you that could help.